Sharing is Caring :)-
Today we will learn about what is turbine and types of turbines used in mechanical industries. We have heard many time the word “turbine”, but most of us don’t know more about It. Turbine is a device which convert kinetic energy of fluid into mechanical energy. The fluid may be either water or gas or steam according to the availability. It is mainly used in power plant industries to generate electric power. It can be categorized into three types. The first on is known as hydraulic turbine, second one is gas turbine and the last one is steam turbine.

Hydraulic turbine is an hydraulic machines which convert hydraulic energy of water into mechanical energy. It installed at dam or near any large water reservoir.

Gas turbine uses compressed air or other gases to rotate the turbine and convert kinetic energy of gases into mechanical energy.

The last one is steam turbine in which first water is converted into high pressure super heated steam, which is further used to drive turbine.

In this article we will mainly concern about hydraulic turbine.


A hydraulic machine which converts hydraulic energy into
mechanical energy is known as turbine. Turbine is a device which converts kinetic energy of water, air, gas or steam into mechanical energy which is further used to rotate generator shaft. Simply turbine is a rotor which has vanes at the peripheral and connected at the end of an electromagnet or well known generator shaft which causes to rotate it and generate electric power. 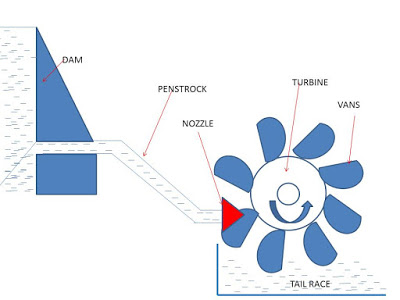 We know that turbine is mostly used in hydroelectric power
plants. As shown in diagram a dam is constructed across a river to store water. There
is an elevation difference between turbine and dam. Turbine and dam is connected
by a large diameter pipe called penstock which carries pressurize water from the storage reservoir to turbine. The turbine is connected to an electromagnet. When water strikes the turbine blades, it makes rotate the turbine hence electric generator which produces electric power. Turbine has different types of vanes fitted on rotter. The water is carried to tail race after worked on the
turbine.


Turbine can be classified in various ways like according to direction of fluid, head at the inlet of turbine, types of fluid etc. These
are

According to the type of energy at inlet:

According to the direction of flow through runner:

According to head at the inlet of turbine:

According to specific speed of turbine:

Today we have learnt about what is turbine and types of turbines. If you have any doubt regarding this article, ask by commenting.

3 thoughts on “What is Turbine? What Are Main Types of Turbines?”