Pressure is measured by the principle of manometry and the various devices used to measure pressure are known as manometers and the branch of science which deals with pressure measurement is known as manometry.

Manometers are the simple type of pressure measuring devices which works on the principle of balancing the column of liquid with the same or some another column of liquid. In this using one column we measure the pressure irrespective of the second column. It has further two types.

Simple manometer are very simple in construction they have a single glass tube with one end open to atmosphere and second end is attached to gauge points whose pressure is to be measured. By measuring the rise of liquid in simple manometer we can easily calculate the pressure. Simple manometer has three common types.

Piezometer is the simple type of manometer which is used to measure the medium pressure range of liquids. A piezometer is a simple glass tube which is open at the both ends. One end of the piezometer is connected to the pipe line, vessel which containing liquid where pressure is needed to be measure and the other end kept open to the atmosphere. The glass tube must be attached vertically upwards and the liquid can freely rise in it without overflowing. The pressure of the liquid easily measured by height of the liquid rise in the tube using scale attached to it. Single column manometer is the modified form of U-tube manometer. In U-tube manometer we have to notice two readings i.e. rising of fluid in one limb and fall of fluid into second limb this difficulty is overcome in case of single column manometer. Here a reservoir of large cross sectional area having 100 times area than tube is attached with one side of the limb. When pressure varies the change in the level of liquid in the reservoir is very small but the variation of pressure can be easily noted in the attached limb with the help of attached scale. The rise or fall of the liquid level gives indication about the change in pressure. The narrow limb can be attached vertical or inclined as per requirements. Inclined type limb used to measure very small change in the pressure.

Mechanical gauges are used to measure very high pressure but having less accuracy. All the mechanical gauges consist of an elastic element which gets deformed on application of pressure. This deformation is further magnified by gear and pinion arrangement to a pointer scale and the pressure is measured. Following are the most commonly used pressure gauges.

Bourdon type is the most commonly type of pressure gauge. It is made up of steel or bronze tube. This tube is known as pressure responsive element. One end of this tube is closed and the other end is connected with pressure inlet. Initially the cross section of this tube is elliptical, but when the gauge is connected to the gauge point fluid under pressure enters into the tube, due to this the shape of the tube change from elliptical to circular. The closed end of the tube is free to move.

The small movement of the free end of the tube is transmitted by using some linkage to the pointer which moves in clockwise direction. This pointer indicates the actual pressure of the fluid by using dial indicator. The dial gauge can be read zero value when the pressure is equal to atmospheric pressure. When pointer goes in anticlockwise it means that it shows negative gauge pressure or vacuum pressure.

This device is used to measure generally low pressure intensity as compared to Bourdon tube. Here elastic steel corrugated diaphragm is the pressure responsive element. Its working is little bit similar to Bourdon tube the pressure is indicated by using needle which is moved with the help of pinion arrangement with the diaphragm. 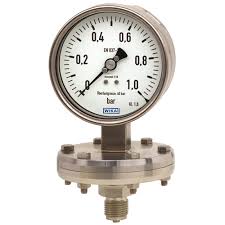 Today we have discussed about various types of pressure gauges. If you have any query regarding this article, ask by commenting. If you like this article, don’t forget to share it on social networks. Thanks for reading it.