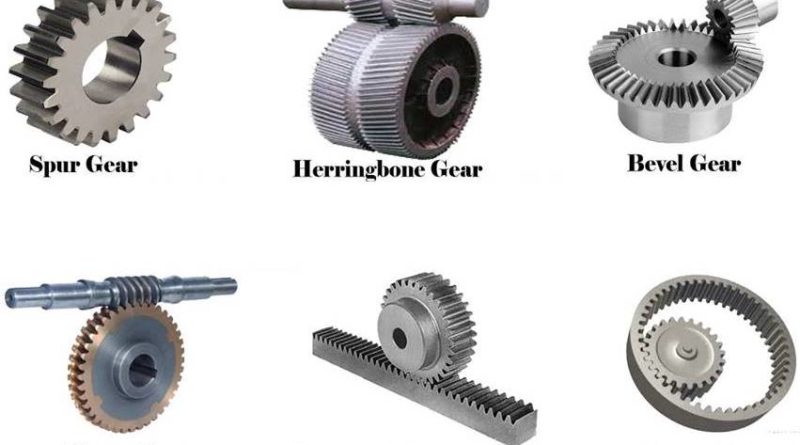 Today we will discuss about what is gear and its types like Spur gear, helical gear, worm gear,  rack and pinion etc. It is observe that gears are used almost in all mechanical devices to obtain different torque and speed ratio. It is a positive power transmission device and basic component of all mechanical devices. There are various types of gears used in power transmission. We will discuss all of these in detail.

A gear is a toothed cylindrical or roller shape component of a machine which meshes with another toothed cylindrical to transmit power from one shaft to another. It is mainly used to obtain different torque and speed ratio or changing the direction of driving shaft and driven shaft.

There are many other power transmission devices like belt drive, chain drive, rope drive etc. but the main advantage of gear system has almost negligible or no slippage between driving and driven member. Tt is mainly use where, there is short distance between axis driving and driven shaft like bicycle motorcycle, car etc.

It works on the basic principle of thermodynamic which state that energy is neither be created or destroyed or we can say it is conservative. it can be converted into one form to another. We know that power is the function of speed and torque or we can say that power is product of torque (Force in rotary motion) and speed (P = TV) of the shaft. So when we connect a small gear on driving shaft and a larger gear on driven shaft, the speed decreases of driven shaft per unit rotation of driving shaft.

Gears can be classified in various types according to construction of teeth, Use, the direction of motion transfer etc. but basically it is classified according to design of teeth. Today we will describe most important types of it.

On the helical gears teeth are cut at an angle from the axis of it. It has cylindrical roller with helicoid teeth.  The main advantage of helical gears is that they work with less noise and vibration because the load is distributed on the full helix as compared to spur gears. It also has less wear and tear due to which they are widely used in industries. It also used for transmit power in parallel shaft but sometime they are used to transmit power in non-parallel shaft also. In the helical gears if the pinion (driving gear) is cut with right handed teeth then the gear (driven gear) is cut with left handed of in opposite direction.

This gear has both right and left handed teeth on one gear. This gear is use to provide additional shear area on gear which further required for higher torque transmission. This is same as helical.

This gear is used to transmit power between perpendiculars. The driving shaft and driven shaft makes a right angle with each other and both the axis of shaft meets each other at one point.  This gear has helical or spiral teeth on a conical shaped geometry and meshes with the same gear.

This gear is used in steering system of automobile. In this type of gear, teeth are cut on a straight rectilinear geometry know as rack and one spur gear known as pinion. This is used to transmit rotary motion to linear motion. It is seen as the infinite radius driven gear.

This type of gear is used to transmit the power in nonintersecting shaft which makes right angle. In this type of arrangement the driving gear is a screw gear and the driven gear is helical gear or gear with spiral teeth as shown in figure.

Now we know what is gear and its types. If you have any question then ask by commenting. If you like this article, don’t forget to share it on social networks. Subscribe our website for more informative articles. Thanks for reading it.

3 thoughts on “What is Gear? What are Types of Gears”